Motion planning for dynamic environments is clearly one of the main problems that needs to be solved for effective autonomous navigation. As shown by Ref and Sharir, the general problem is NP-Hard, which explains the continued efforts to find algorithms to cope with that complexity.

A much more overlooked but equally critical aspect of the problem is motion prediction. Motion planning algorithms assume the availability of previous knowledge about how every mobile object in the environment will move, an assumption which does not hold for a vast number of situations and environments. The alternative is to predict how objects will move and to use that prediction as the input of the motion planning algorithm.

There is a strong link between motion prediction and state estimation. In order to predict the future state of a give object, it is necessary to have an estimate of its current state, where more accurate estimates will yield better predictions. Conversely, most state estimation techniques apply some kind of motion model to propagate the state into the future and then incorporate sensor data to correct the predicted state. This process is outlined in Fig. 51.1 and explained below: 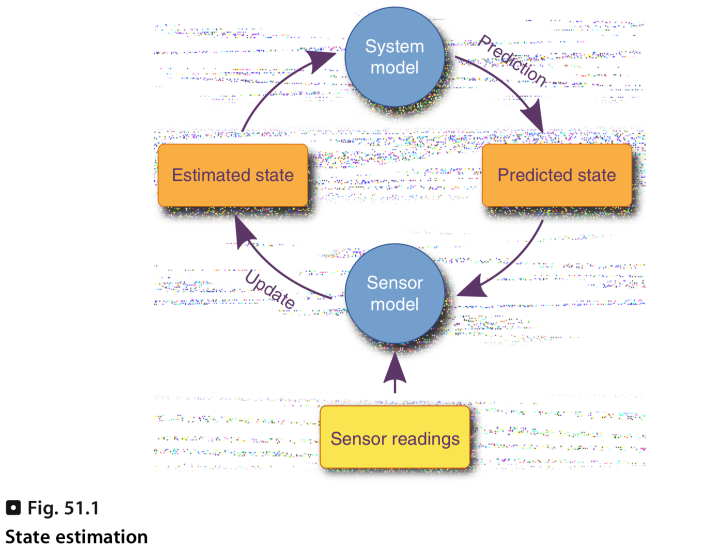 Due to the uncertainty involved in the state estimation and prediction, probabilistic approaches become a natural choice for addressing the problem. One of the most broadly used tools is the Bayes filter and its specializations such as the Kalman Filter, Hidden Markov Models, and particle filters.

A powerful tool: The Bayes Filter

The objective of the Bayes filter is to find a probabilistic estimate of the current sate of a dynamic system — which is assumed to be "hidden," that is, not directly observable —given a sequence of observations array every time step up to the present moment.

The main advantage of using a probabilistic framework such as the Bayes filter is that it allows to take into account the different sources of uncertainty that participate in the process, such as:

The Bayes filter works with three sets of variables:

A Bayes filter defines a joint probability distribution on

on the basis of two conditional independence assumptions:

These assumptions lead to the following decomposition of the Bayes filter:

; what is the state probability distribution for time

, knowing all the observations up to time

The most common case is filtering

which estimates the current state.However, it is also frequent to perform prediction

The Bayes filter has a very useful property that largely contributes to its interest: filtering may be efficiently computed by incorporating the last observation

into the last state estimate using the following formula:

, it is possible to describe a Bayes filter in terms of only three variables:

, leading to the following decomposition:

where the state posterior of the previous time step is used as the prior for the current time and is often called belief state.

Under this formulation, the Bayes filter is described in terms of a local model, which describes the state's evolution during a single time step. For notational convenience, in the rest of this chapter only those local models will be described, noting that they always describe a single time step of the global model.

Of all Bayes filter specializations, probably the most widely used as the Kalman filter and the extended Kalman filter, which are at the heart of many localization, mapping and visual tracking algorithms.