It is important for you to understand the efficiency of these Python data structures because they are the building blocks we will use as we implement other data structure in the remainder of the book.

Two common operations are indexing and assigning to an index position. Bothe of these operations take the same amount of time no matter how large the list becomes. When an operation like this is independent of the size of the list they are

Another very common programming task is to grow a list. There are two ways to create a longer list. You can use the append method or the concatenation operator.

This is important for you know because it can help you make your own programs more efficient by choosing the right tool for the job.

Let us look at four different ways we might generate a list of n numbers starting with 0. First we will try a for loop and create the list by concatenation, then we will use append rather than concatenation.

In the above experiment we also show the times for two additional methods for creating a list:

It is interesting to note that the list comprehension is twice as fast as a for loop with an append operation. After thinking carefully about Table 2.2, you may be wondering about the two different times for pop.

The reason for this lies in how Python chooses to implement lists.

As a a way of demonstrating this difference in performance let us do another experiment using the timeit module.

The code below shows one attempt to measure the difference between the two uses of pop. As you can see from this first example, popping from the end takes 0.0003 milliseconds, whereas popping from the beginning takes 4.82 milliseconds. For a list of two million elements this is a factor of 16,000. 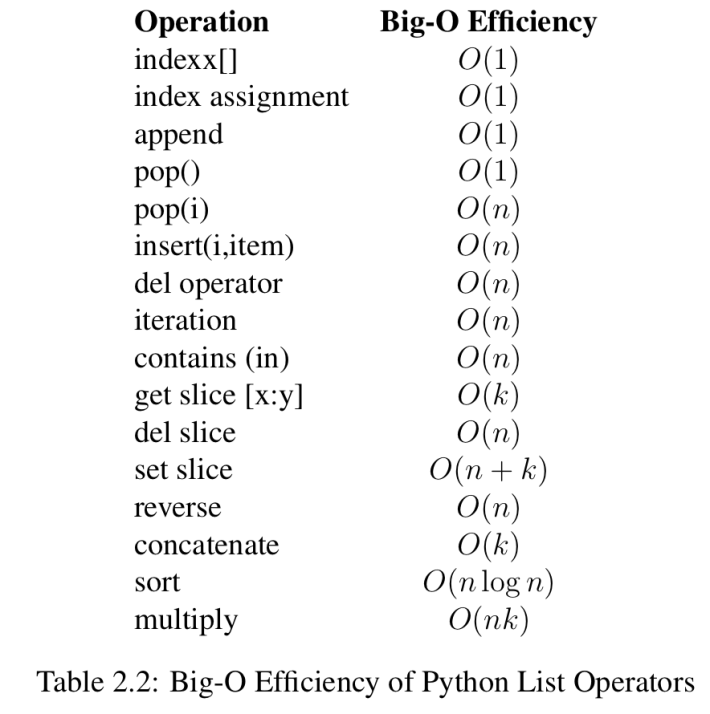 There are a couple of things to notice about this code. The first is the statement from __main__ import $x$. Although we did not define a function we do want to be able to use the list object x in our test. This approach allows us to time just the single pop statement and get the most accurate measure of the time for that single operation. Because the timer repeats 1000 times it is also important to point out that the list is decreasing in size by 1 each time through the loop. But since the initial list is two million elements in size we only reduce the overall size by

The second major Python data structure is the dictionary. As you probably recall, dictionaries differ form lists in that you can access items in a dictionary by a key rather than a position. The thing that is most important to notice right now I that the get item and set item operations on a dictionary are

. Another important dictionary operation is the contains operation. Checking to see whether a key is in the dictionary or not is also

. The efficiency of all dictionary operations is summarized in Table 2.3. One important side not on dictionary performance is that the efficiencies we provide in the table are fora average performance. In some rare cases the contains, get item, and set item operations can degenerate into

performance bet we will get into that when we talk about the different ways that a dictionary could be implemented.

and the contains operator for dictionaries is

. The experiment we will use to compare the two is simple. We'll make a list with a range of numbers in it. The then we will pick numbers at random and check to see if the numbers are in the list.