All these examples can be unified under a general formulation: performing an action in a scenario can yield a reward. A more technical term for scenario is a state. And we call the collection of all possible states a state-space. Performing of an action causes the state to change. But the question is, what series of actions yields the highest cumulative rewards?

Here are some examples to open your eyes to some and successful uses of RL by Google:

It's not supervised learning, because the training data comes from the algorithm deciding between exploration and exploitation. And it's not unsupervised because the algorithm receives feedback from the environment. As long as you're in a situation where performing an action in a state produces a reward, you can use reinforcement learning to discover the best sequence of actions to take.

A robot performs actions to change between different states. But how does it decide which action to take? The next section introduces a new concept, called the policy, the answer this question.

In reinforcement learning lingo, we call the strategy a policy.

One of the most common ways to solve reinforcement learning is by observing the long-term consequences of actions at each state. The short-term consequence is easy to calculate: that's just the reward. As you know, performing an action yields an immediate reward, but it's not always a good idea to greedily choose the action with the best reward all the time.

We've so far described one type of policy where the agent always chooses the action with the greatest immediate rewrd, called the greedy policy. Another simple example of a policy is arbitrarily choosing an action, called the random policy. If you come up with a policy to solve a reinforcement learning problem, it's often a good idea to double-check that you learned policy performs better than a random policy.

The long-term reward is called a utility. It turns out, if we know the utility of performing an action at a state, then it's easy to solve reinforcement learning. For example, to decide which action to take, we simply select the action that produces the highest utility. The hard part, as you might have guessed, is uncovering these utility values.

is by recursively considering the utilities of future actions. The utility of your current action is influenced not by just the immediate reward but also the next best action, as shown in the formula below. In the formula,

denotes the next state, and

denotes the next action. The reward of taking action

is a hyper-parameter that you get to choose, called the discount factor. If

, then the agent chooses the action that maximizes the immediate reward. Higher values of

will make the agent chooses the action that maximizes the immediate reward. Higher values of

In some applications of reinforcement learning, newly available information might be more important than historical records, or vice versa.

, and change our utility function as follows:

Reinforcement learning can be solved if we know this

function. Conveniently for us, there's a machine learning strategy called neural networks, which are a way to approximate functions given enough training data. TensorFlow is the perfect tool to deal with neural networks because it comes with many essential algorithms to simplify neural network implementation.

Application of reinforcement learning requires defining a way to retrieve rewards once an action is taken from a state. A stock marker trader fits these requirements easily, because buying and selling a stock changes the state of the trader, and each action generates a reward (or less).

The states in this situation are a vector containing information about the current budget, current number of stocks, and a recent history of stock prices (the last 200 stock prices). So each state is a 202-dimensional vector.

For simplicity, there are only three actions: buy, sell, and hold.

The goal is to learn a policy that gains the maximum net-worth from trading in a stock market.

To get stock prices, we will use the yahoo_finance library in Python. You can install it using pip, as shown below, or alternatively follow the official guide.

Create a helper function to get stock prices using the yahoo_finance library. The library requires three pieces of information: share symbol, start date, and end date. When you pick each of the three values, you'll get a list of numbers representing the share prices in that period by day.

Most reinforcement learning algorithms follow similar implementation patterns. As a result, it's a good idea to create a class with the relevant methods to reference later, such as an abstract class or interface.

Basically, reinforcement learning needs two operations well defined:
(1) how to select an action, and
(2) how to improve the utility Q-function.

Most reinforcement learning algorithms boil down to just three main steps: infer, do, and learn.

Next, let's inherit from this superclass to implement a random decision policy. We only need to define the selection_action method, which will randomly pick an action without even look at the state.

In listing 6.7, we assume a policy is given to us, and run it on the real world stock-price data. This function takes care of exploration and exploitation at each interval of time. 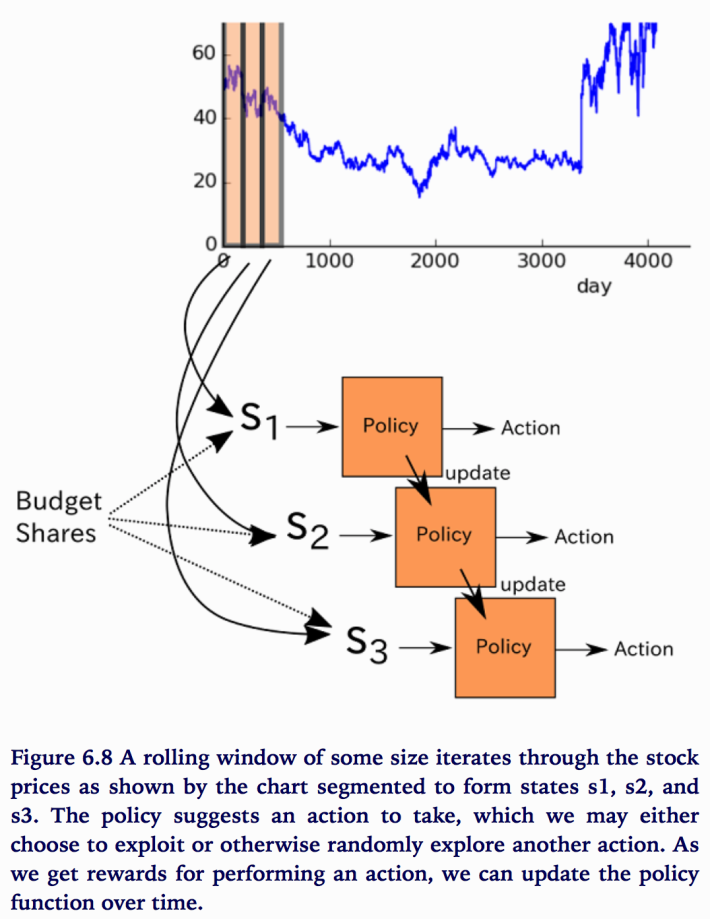 To obtain a more robust measurement of success, let's run the simulation a couple times and average the results. Doing so may take a while to complete, but your results will be more reliable.

In main, define the decision policy and try running simulations to see how it performs.

The input is the state space vector, with three outputs, one for each output's Q-value.